Your own backyard can be a great travel destination.

We live in a very beautiful part of the Country and we do not take it for granted. Often in the summer, usually in the late afternoon when the sun has eased it’s blazing grip on the hills, I ask Mike if we could follow the hood of our car for a quick adventure.

It was Labor Day, and while we probably have another three weeks of hot weather in the Mid-Atlantic, the unofficial start of Autumn was the next day, so with summer slipping away rapidly we felt it was a fitting evening to visit Pen Mar Park and High Rock.​

SIDE NOTE: TThe park shares a name with the sleepy little community of Pen Mar Maryland/Pennsylvania. The town straddles both states, hence it’s mashed up portmanteau of a name. It is located on the Mason-Dixon line, the imaginary line that separates Pennsylvania and Maryland and delineates the North from the South geographically.

The park sits at an elevation of 1322 feet and is located on South Mountain. ​It was originally designed in 1877 as an amusement park to encourage people to use the Western Maryland Railroad. A successful tactic, the park attracted thousands of visitors from the surrounding counties as well as Baltimore and Washington DC.

With unprecedented views toward the gentle Tuscarora mountains, it is also a favorite stop on the famed 2181 mile long Appalachian Trail which runs right through the park.

While the amusement park is long gone, there is a pavilion, picnic tables, a small play area, and indoor bathroom facilities. There is also a museum that highlights the park from its heyday to today. During the summer there is a concert series in the pavilion. While visiting a few years ago, there was a 1940’s style big band playing and people were dancing in the twilight, we felt transported back in time. This is that type of place.

If you plan to visit, there are two adequate parking areas. The park is open until dark seven days per week, but the park facilities (Bathrooms) are closed at dusk. Alcohol is prohibited and there is a sign that says no dogs, but we see dogs there all the time and believe the sign to be old as most parks are now dog friendly. But as always, please be responsible and clean up after your dog and keep them on a leash at all times.

Located two miles from Pen Mar park in Cascade Maryland, High Rock is situated at 1400 ft above sea level. The views encompass a vast swath of the Cumberland valley below.

SIDE NOTE: The pinnacle of the mountain is called Quirauk Mountain (Pronounced “Key-rock”) and is a restricted area due to it’s past life as part of the Fort Ritchie Military post. To this day, the still fortified, but abandoned area, is guarded by Maryland State Police.

There is a small parking area directly in front of the rock formation and several areas along the side of the road before it dead ends at Quirauk. We pulled off to the side and leashed up our dogs for the short walk to the stairs.

​We had not been here in some time and were shocked by the amount of graffiti on the stones. ​While I will not engage in the debate of art versus vandalism, I will say that I was deeply saddened by the ruin of such a pristine vista. I am a child of the eighties. I learned long ago to grudgingly accept graffiti on buildings, subway cars, buses and trains. But I will never understand an artistic assault on the environment.  Many, such as the top of this mountain, are places that can never be restored to what they once were. In my opinion, the need for self expression on natural wonders is both destructive and selfish.

Sighing over things that we could not change, we walked up the newly added staircase to the top of the rocks. There was a small assembly of people perched on High Rock the evening we visited, but there are often many people here jockeying for position on the rocks all trying to find the best vantage point for their obligatory selfies. Patience will be needed as anything else would invite danger. There are no guardrails here, death and serious injury happen every year, and viewing is strictly at your own risk. 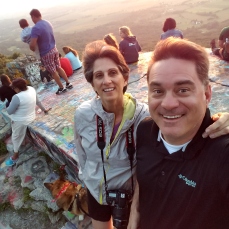 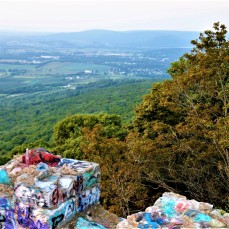 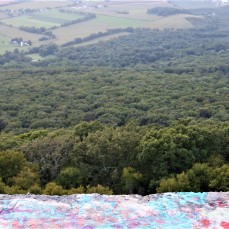 Up until a few years ago High Rock was a popular place for hang-gliding. There is a metal launch pad wedged into the face of the rock, but unfortunately, after a flyer was killed in 2015 the State banned hang-gliding from High Rock unless by special permit, which is hard to obtain. But before the ban, on any given night, you would find very courageous adventurers launching themselves from the platform and soaring high above the leafy valley.

The late summer haze had permeated the valley below and the views were somewhat limited, but haze also makes for great sunsets. We managed to capture a few breathtaking photos as the sun tucked its sleepy golden head into the azure blanket of the Blue mountains before the corgis were ready to go. We left the mountain to its secrets as we chased the large brilliant moon back home.

Thank you for reading, I hope you enjoyed a peek into my backyard!

This site uses Akismet to reduce spam. Learn how your comment data is processed.